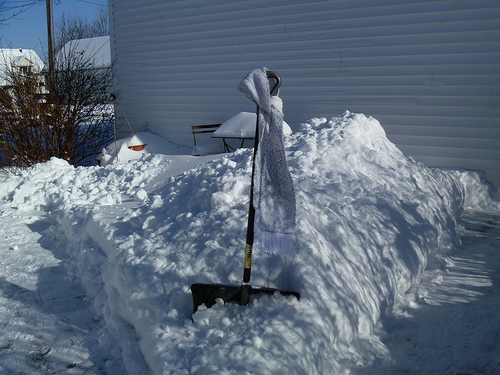 I warped, wove, washed, and wore this scarf during a blizzard warning! It was two hours on the loom total, hand-washed and dried overnight on the radiator. When I wore it shoveling out from the 10”+ of snow the next morning, I was quite happy with it tied snugly around my neck. (And even happier when my neighbor drove up on his tractor and plowed our driveway!) 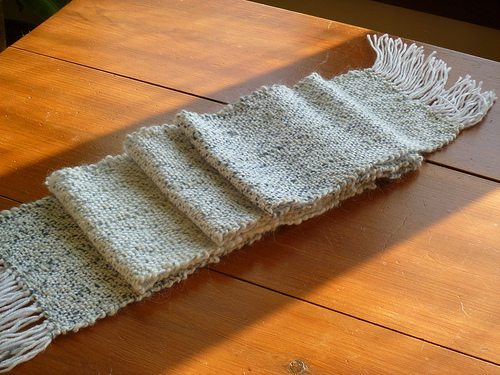 I used an 8 dent heddle and white acrylic for the warp, Rizotti (color: Marry) for the weft. The weft yarn is a blend of wool, mohair, nylon, and acrylic, and I found I hardly needed to beat it. It's very, very light and fluffy. I had a notion to make this a ruffle scarf by tugging a center warp thread and gathering the scarf in a little bit, but once I started, I didn't hold the opposite end and whoops! I pulled an entire thread out of the scarf. After scratching my head and laughing a little, I realized I kind of liked the look, so I pulled out two more warp threads on purpose.

The slubby texture led to some bumpy selvedges, and I just didn’t care. The one color change I messed up (you can see the color go from gray to white all of a sudden) didn’t bother me. It was a scarf woven during a blizzard! I mean, really! 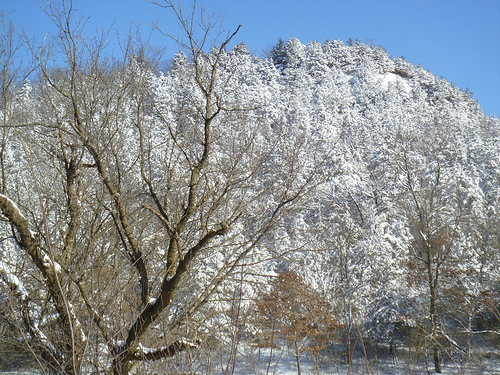