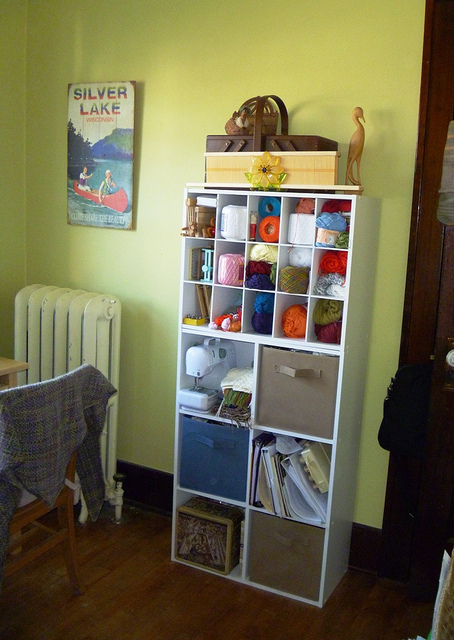 Merry Christmas to me, about six weeks early.

What's new? A Glimakra Emilia stand! It was delivered this morning, along with a second 10 dent heddle and a second heddle kit. I was able to swap out the big desk in my work area, and I replaced it with this half-size desk we happened to have sitting around. The new stuff in my room actually inspired me to tidy up–although I have some clutter in a few of those cubes–but now my yarn is all in its proper place in the organizer I bought this summer. Extra heddles are corraled by a cool sunflower napkin holder. Also on the top of the organizer is a neat Norwegian band loom, or grindvev, I picked up at a local thrift store. It's quite a treasure that I'll blog about another day.

My mini inkle loom was made by Mac's Traditional Shop. It's just 16" long, and it can make about a 40" to 50" band. Isn't it cute? I have yet to finish my first sample. I made some beginner mistakes warping, and after struggling for about half an hour, it occurred to me that I didn't know how to use an inkle loom! And so I went to Youtube and watched a few videos, and then returned to the loom with a new perspective.

The top of my organizer also holds my sewing kit and a wooden bird, carved for me by my husband 20 years ago this coming Christmas. It's one of my priceless treasures.