Weaving a Band on a Rigid Heddle Loom 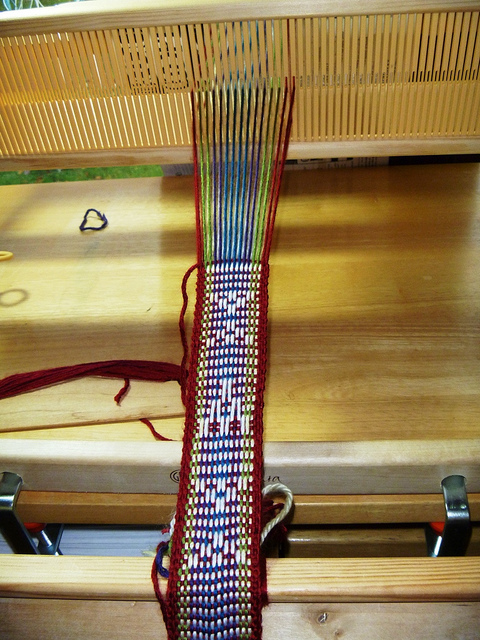 I had a crazy idea to weave a band, and I considered trying my backstrap loom, but then started thinking about weaving it on my Glimakra Emilia. I used my 10 dent heddle, some worsted weight yarn, and an inkle shuttle. There were some good instructions on doing just this in both great rigid heddle books, one by Betty Linn Davenport, and one by Jane Patrick. However, both warned not to expect perfect results, primarily because the heddle spreads out the yarn too wide, and most RH looms don't like a lot of tension.

My loom has the benefit of being extremely sturdy and I really cranked up the tension in order to draw the spread out yarn down into one narrow band. I made certain to warp light colors in the slots so I could try a simple pattern. The heddle was used only to raise and lower the warp, and the inkle shuttle was used to beat the weft.

This was super fun; however, my thick-yarned band looked a little nicer on the loom than off. Whenever I wove the pattern, the edges pushed in a little. So, it's a touch wavy, but I love the rich colors. Next time I'll definitely use a finer, smoother yarn and warp a slightly wider area.  (There's always a next time!)

2 Replies to “Weaving a Band on a Rigid Heddle Loom”