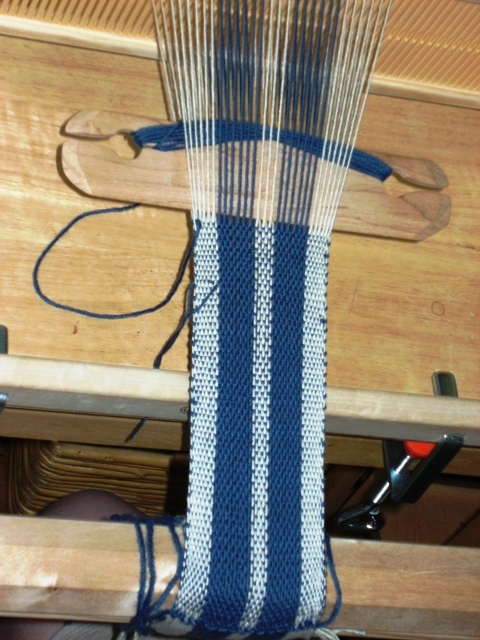 I reorganized my little home office, tossing out junk, weeding through old paperwork, organizing a closet, and giving away several boxes of books. I blame it all on my new Glimakra Emilia loom. Once I started weaving, I needed to have lots of things at hand, and so I had to organize. Plus, having such a nice loom in such a messy space just wasn't right. Although it kept me from actually weaving for awhile, the cleaning was worth it. I now have a super cute and organized work area… and I'll post pictures of my new space next time. (My battery gave out.)

Once my space was ready, I set up my loom again, warped it with some cotton, and made three curtain sashes for our bedroom. They ended up a little short, and so I braided some loops to fasten them. To make these, I warped about 90" of cotton, and tugged each weft strand tightly, and used my inkle shuttle, trying for a warp-faced band. Because the cotton was pretty sticky, it didn't quite work out, but it's more band-like than if I had gone for a balanced weave. They were 14" each, and I only had about 6" of warp left. When I improve as a weaver, I'll make these again, this time going for about 18". I'll also use a slicker cotton and brighter colors.

I then started a fun project, using that old Red Heart acrylic that's been hanging around forever. I decided to do a sampler, using a bunch of different patterns from Betty Linn Davenport's Textures and Patterns for the Rigid Heddle Loom. What an amazing book! If you have any interest at all in weaving on a rigid heddle loom, borrow or buy this one. I started with a warp-faced float pattern and next will be a honeycomb pattern. Seriously, it's like Christmas morning playing around with these patterns. Everything is fun and just what I wanted… except for that one mistake. (Don't look too closely.) These patterns are created by using a pickup stick (it can be a ruler or shuttle, just something longer than your weft) that sits behind the heddle. After you set it up for your pattern (sometimes under threads, sometimes over), you can create really beautiful patterns by incoporating the pattern stick into the regular up and down weaving. Here's a little video I found on Youtube.

For my first attempt, I had to read the entire introduction several times. It finally dawned on me that the pattern or pick-up stick can only be used on the slot threads. And once I realized that, I saw it was one of the first things Betty wrote about. It's funny how learning something new comes in bits and pieces, and then all of a sudden it comes together. I'm interested in seeing how the sampler turns out, because even though I dislike using the acrylic (it's worsted weight, a little too thick for a 10 dent heddle), it's actually pretty.

And finally, it's June! Strawberry jam time. Last year was the first time I made freezer jam, and this weekend, I made six quarts-worth. Lots of fun, and so nice in January…