Believe it or not, every so often I wave goodbye to a loom. Recently, I sold my 25″ Erica rigid heddle loom to a new weaver who wanted to give it a try. The 12″ two harness Peacock, a teeny, vintage loom in need of new heddles and love, was also sent to a new home.

But even though I feel some relief and, yes, a bit smug, after sending these two out into the world (I’ve downsized! I’ve gained some space!), that hasn’t stopped me from welcoming a few more: one new, one old. (Hmmm… there goes that smugness.) I’ll blog about them at another time.

In the meantime, thanks for the memories, Erica. Glad to have known you, Peacock. 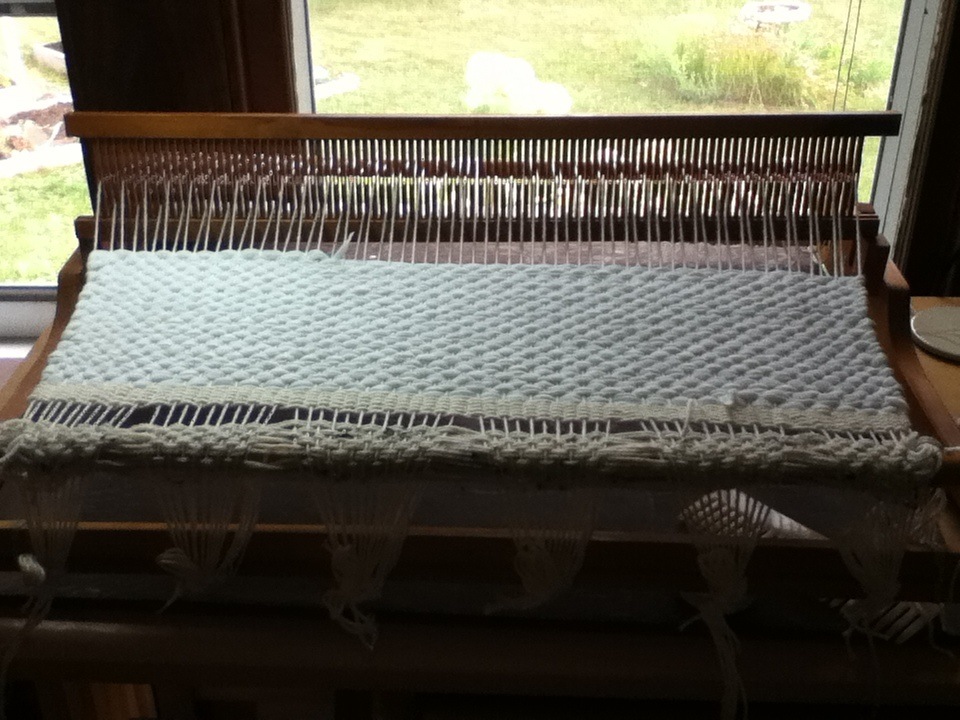 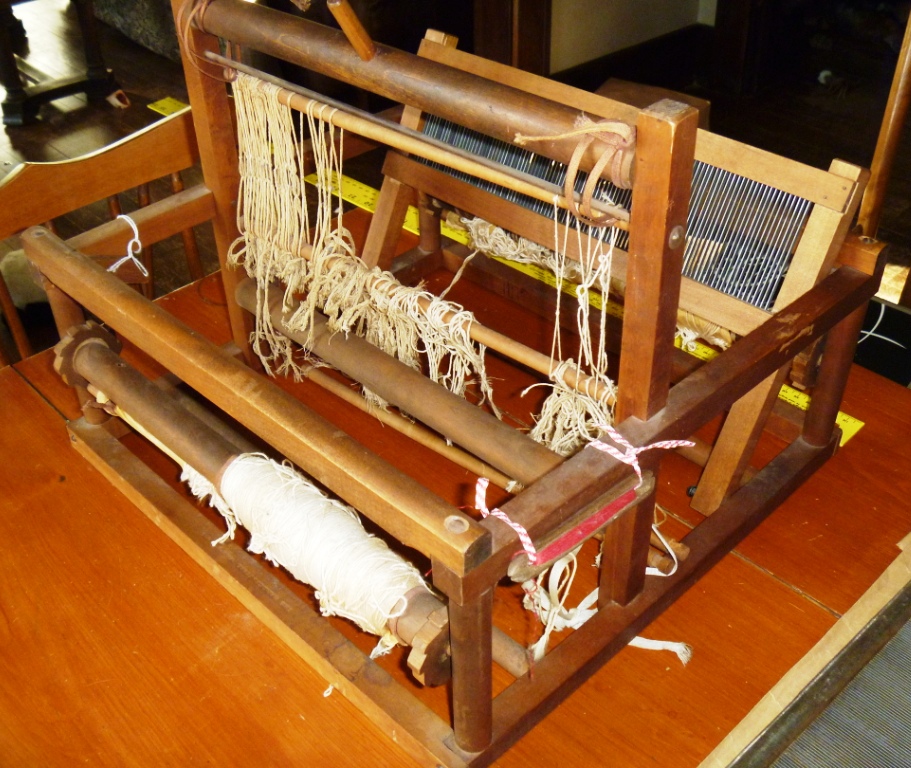 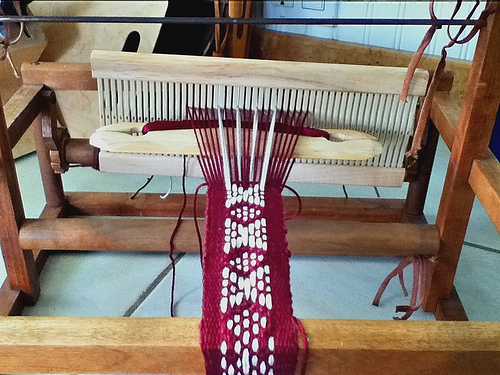 Someday I'll get tired of taking so-so pictures with my iPod and go back to my "real" camera. In the meantime, all I have to show of the latest experiment is this blurry picture of an attempt to weave a band using a rigid heddle (this was the 10 dent Beka) and the little antique Peacock loom. I had always wanted to refurbish the Peacock loom because it's so tiny and portable (12" width), but I failed to get up the energy to tie 100 string heddles. Instead, I ordered the smallest Texsolv heddles (5 7/8", I think) which were too long. So, I need to either shorten them somewhat, the length and the eyes are too big, or tie those 100 string heddles! Either way, that means this little loom is sitting empty… or is it? After reading up on Sami-style weaving, I warped the rigid heddle and tied it onto the Peacock loom, using only the warp and cloth bars. I removed the heddles (carefully!) and also the reed, which is held in very lightly by two small screws. I'm considering removing the top bar, too, because it's in my way and I happen to be enjoying weaving bands. But then I need to sit back and wonder if it's better to put the Peacock loom back together and pass it along to someone who will tie those 100 string heddles, or if it's better to keep it in pieces and use it as a cradle or box loom. Decisions, decisions…

I couldn't make heads or tails of the pattern until I realized the pattern strands (which are in the center and double the thickness of the other strands) are sometimes raised from beneath, and sometimes lowered from above. This may not make any sense, but once I figured it out, I knew how to do this style of weaving. There are some really wonderful band weaving heddles out there with fancy double holes and smaller slots, but if you want to try it, I suggest using a simple rigid heddle and a pattern. You don't even need the loom, as traditional weavers do this backstrap-style. If you'd like a place to start, I suggest you try The Braids and Bands Yahoo group. It's free but you do need to join. Try the Files section to find a series of PDF handouts by Susan Foulkes, who recently held an online course for Sami style band weaving.

Now that I've got the hang of it, I want to use a finer thread, more colors, and a more intricate pattern.

I've scanned thrift and antique stores for over a year searching for looms. I've found Weave-Its, a Wonder Weave (4" loom), and different types of knitting looms. I've spotted a few floor looms, mostly huge and needing a tremendous amount of work. What I haven't seen has been a tabletop loom. Until yesterday.

I found not one but two tabletop looms within a half an hour! And maybe I didn't get the most tremendous deals, but I was kind of like a kid in a candy store who has a credit card and a very strong desire to buy a lot of candy! Okay, bad comparison aside, I bought them both. And in my tremendous daze of Loom Craziness, I walked out of one of the stores without the reed. I called the antique shop owner when I got home (the store was hours away from where I live), and she said she'd mail it to me ASAP. 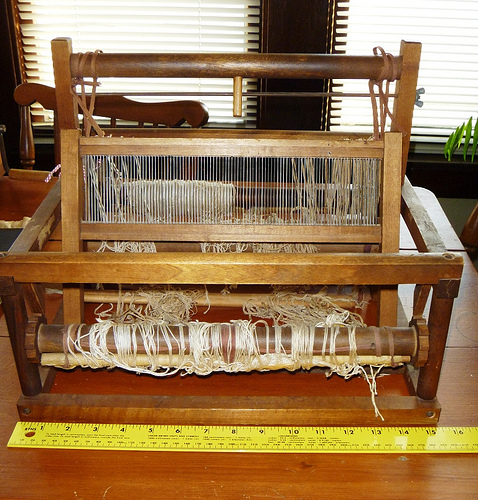 So, what kind of looms did I end up with? I can identify one of them so far: A 12" two harness Peacock Loom, by Handcrafters from Waupun, Wisconsin. These are no longer made, but they're very cute. Mine had a tag on it that said it was from a junior high school in Illinois, and it shows a lot of use. Nothing is broken or missing, but gee… I'll be teaching myself how to make string heddles within the next few days because every one of them has disintegrated. However, the reed is free of rust and everything else looks very nice. This was the first loom I spotted, and at that time the $75 seemed excessive but I rationalized it with a "But I never see these types of looms for sale and I'll probably not ever see one again." Bought it! 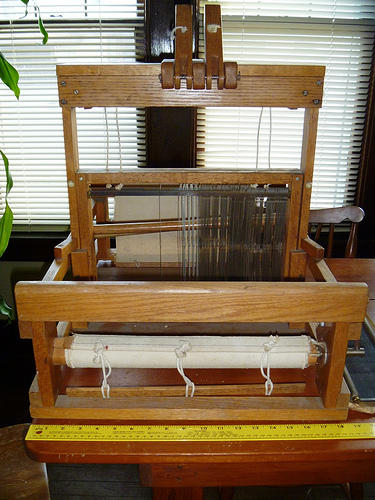 And about 20 minutes later, I walked into a second antique store to find this, another two harness tabletop loom. This is much bigger, with a weaving width of 14". It's oak, extremely well made and sturdy, and I'm starting to think it's a Kessenich loom because it resembles the pictures of four harness looms I've spotted. Compared to the little Peacock loom, this one really looks like it's ready to be used. The heddles are metal and free of rust. I remember the reed also being usable, but we'll see when it arrives.  (Can you imagine the adrenaline rush I had when I got home and took it out of the car, only to search frantically for the reed? Ah well… I'll never leave a store again without double-checking the bits and pieces of a loom I've just purchased.) It also came with a second reed, I believe an 8 dent.

Speaking of purchase price, this one was listed at $125. Again, was it a deal? I hope so. It needs a little bit of cleaning, two tiny dowel replacements where the reed rests, and it's ready to warp. It does have an extra two dowels looped through a cord and fastened on either side near the top. I don't know what the purpose of this is.

Speaking of warping, I don't know how these looms will differ from my rigid heddle loom, how to use the string/metal heddles versus the rigid heddle, how much warp they can hold, etc. I have lots of questions, but the biggest question I have (and my husband, too) is where in the world will I put them?