If this works, it’ll be really cool. I’m afraid it won’t be square once it’s off the loom.

This first row was 45 picks!

After a few stumbles, I warped up the Emilia with lavender alpaca and began weaving a shawl.

Why Do I Need Another Loom?

Why? Hmmm…. Can I come up with a reason?

It's on its way… a teeny tiny rigid heddle loom, brand new and from Ashford, called the SampleIt. With only an 8" weaving width, I think I can actually carry it in a small bag (like the one I bought years and years ago for knitting) and store it in a drawer. Not that I'll keep it at work all the time–I may need it for weaving while watching a movie (it fits on a lap!) or bringing along on weekend trips (too small to say nope, that's too big to tote along). Somehow, I avoided Cricket fever, even though I had come up with a list of reasons why a small rigid heddle loom was right for me. But with Christmas right around the corner, my husband bought this one for me as a gift. So, there's yet another reason–it's a gift! I have to accept it.

And so the year ends with the addition of four looms, some used, some new, some gifted: the Ashford 4 Shaft table loom (gifted), the Schacht Inkle loom (used), the modular triloom from Dewberry Ridge, and this teeny Ashford SampleIt Rigid Heddle loom. I added up all the $ spent, and was relieved to realize that all my looms (all of them, not just the 2012 looms) only add up to maybe 1/3 of a new floor loom. Whew! Still…

… it's a slippery slope!

I've been thinking about built-in warping boards ever since I watched the commerical for a Clover loom (available in Japan only). The warping board is shown if you forward to the 1:40 mark. Here's a first try at adapting an expandable clothing rack to create a warping board on the Emilia. I think I could get twice as long of a wap if I zig-zag from side to side instead of go around in a circle. It looks strange, but it worked great. 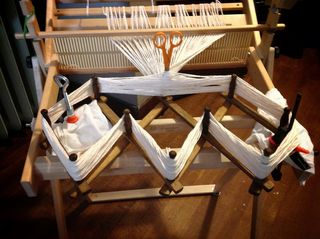