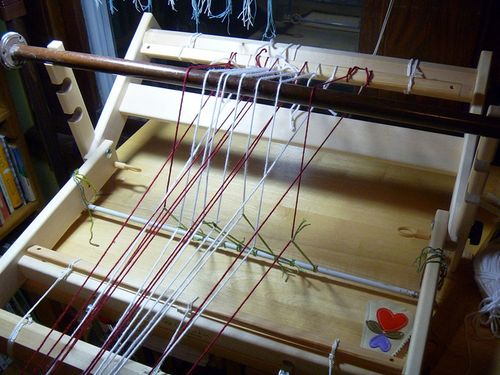 I was convinced I could weave an inkle-type band on my Glimakra Emilia. I studied several pictures of inkle looms, and even though they aren't expensive, I still wanted to try this on my loom. So, I dug up two curtain rods, putting one in the highest heddle notch and the other underneath the bottom of the loom. If I do this again, I would spend some time searching for a better dowel or metal skewer to hold the string heddles.

I then cut and tied the string heddles, warped a very short and simple red and white warp, and started to weave. Even though I thought this would work, I didn't actually think it would work so well. The Emilia has a nice slant that made getting a wide shed easy.

After just 30 minutes of weaving, I had a slightly clunky but nicer-than-I-expected band. Next: dog leash??