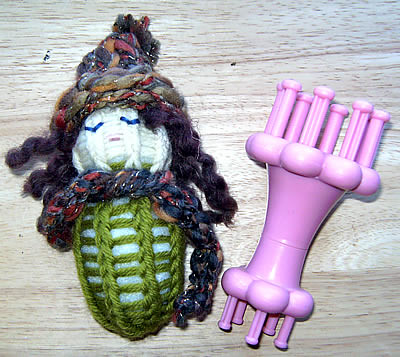 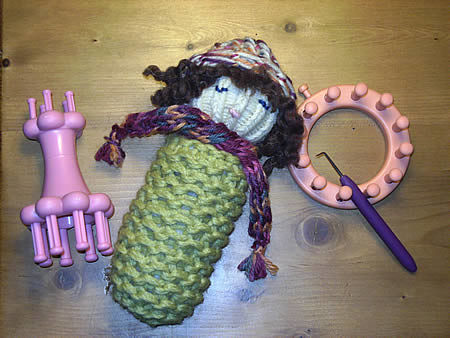 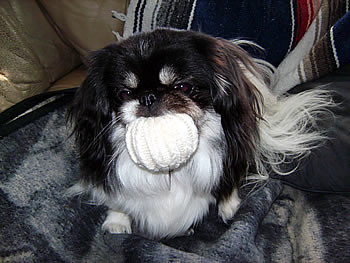 I knitted this doll using the same pattern as Loofah, only on the large end (8 peg) spool Knifty Knitter instead of the flower loom. She’s very tiny, about 4″. I think if I were going to make these dolls to give away, I’d have to find a way to keep the stuffing in place. As it is, you can tell the gaps between each row are so large you can see the polyfill. One idea I had is to use a child’s sock as a way to stuff the doll. I can also use a tighter stitch like I do for the head.

One more problem I’m having is with the hair. Right now, it looks okay, but it’s not durable and wouldn’t stand up to much playing. I separated strands of Lion Wool Ease but as they come apart, it’s easy to tear off sections. I need to research a way to make decent hair.
When we were visiting family over Thanksgiving, I knitted this ball with the flower loom. My plan was to make three of them, print out a “How to Juggle” tutorial, and give them as a gift. However, the little dog of the household got one look at this ball and decided it was hers. How could I refuse that face??

I made this loomed dolly on the smaller (12 peg) flower Knifty Knitter. The pattern is Lulu the Loomed Dolly, and it’s Bev’s from Cottage Garden. She loom knits Lulu Dolls for charity.

When I saw her dolls, and I saw the Lulu that American Girl in Italy made, I had to give it a try. I used Lion brand wool (worsted weight) for the head and some left-over medium-weight wool for the body.

I didn’t have the 18 peg loom that Bev uses, so I used my brand-new flower loom. Compared to the smallest loom in the KK round loom kit, this one has 12 pegs vs. the 24 peg blue loom; however, it’s still large gauge.

It took me awhile to decide what stitch to use, because I knew I wanted the head to look different than the body. After starting four times, I ended up using a 1-over-3 wrapping and just the basic knit stitch. How I do this is I single wrap each peg, and I go completely around four times total. I then knit the bottom loop over the three remaining loops, and I do this for each peg. I then wrap just one strand around all pegs and continue.

I made the head this way by knitting 24 rounds. (If I was using thicker yarn it would have been many fewer times around.) I then switched colors and started the body. I used two strands here, plus I choose the garter stitch. I knitted Loofah’s body to be twice as long as her head.

When I neared the end of the body, I decreased by putting one existing loop on the neighboring peg and knitting off. I did this all around so I was left with six loops. I then gathered them all together just like a hat. I stuffed the doll with polyfill, and gathered the head.

When Loofah was at this stage, I decided the garter stitch wasn’t exactly attractive. It was, in fact, sorta odd looking. Although I had played around with some cutsie names like Magnolia, in the end, she most resembles a loofah gourd, so that’s her name: Loofah.

I knitted a little scarf on my other new KK loom: the spool loom. It makes two different sizes of i-cords. I used the smallest side, and I even added some tiny tassels. I then knitted Loofah a hat, so I went back to the flower loom and knitted about two inches. I decreased the top of the hat and gathered it off. The brim curled up on its own.

Finally, I decided Loofah needed some personality, so I had a try at stitching a face. She has a tiny pink mouth, two blue eyes, and some wild hair. You may notice one of her eyes is crooked–looks like I need some practice!

Because she’s wool, I wonder if she’d felt at all if I washed her. I’d have to de-stuff her first, but it may be a cool look. At this point, though, I’m a little attached to her, and I’d hate it if something bad happened to my lil’ Loofah.

I think Loofah was a great first doll. She’s pretty much a tube with a scarf and hat. Now that I have these smaller looms, it’ll be fun to knit her new things once and awhile like a blankie, shawl, and maybe even a couple of snazzy tube dresses!

By the way, it’s sure nice to have the kitties nearby. Whenever I need help choosing a color, they’re right there to lend a helping paw. 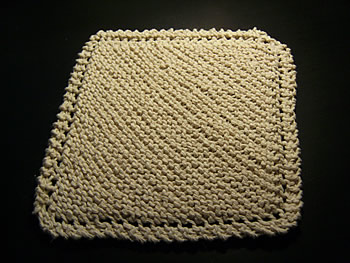 It’s a little bit crooked! And the edge that I ended on looks square instead of rounded. Oh well, here it is in all its glory: my very first knitted-with-needles FO. I enjoyed it, even with all my mistakes. The funny thing is that I see this particular dishcloth pattern everywhere now that I made one. I saw two for sale yesterday, and we even have one in our own house, something that was left behind from the previous owners.

What should I make next on the needles? I’ve always wanted to make a calorimetry and also a Kitty Pi but both of those take some expertise. We’ll see. Maybe another dishcloth!

How cool is this? A loom-dedicated online ‘zine called, appropriately enough, The Loom Knitters Circle. Featuring patterns, articles, and a forum, this great site is just what loom knitters have been asking for. Visit it today!

As far as my own projects, I didn’t take any pictures but over the weekend I knitted four little hats for my nieces’ American Girls dolls. I used the blue loom, two strands of Moda Dea yarn, and invented a slightly different pattern each time.

I also finished my ziggy-zag scarf. In the end, I probably used 1.5 skeins of yarn. I’ll post a picture, soon!