A yarn bowl, plus slippers for me 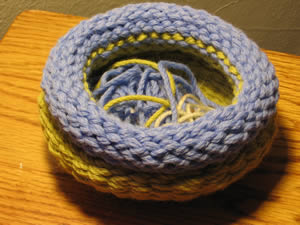 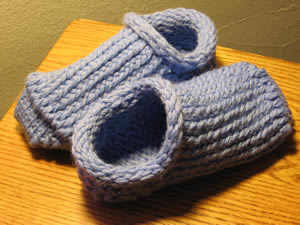 Sometime yesterday, it became apparent that my bag was never going to be a bag. It was, in fact, a bowl. I had tried knitting the sides again, but they sunk in so much that the whole thing looked funny. (Thanks, Saaski, for your comments about this. Happy to know you had the same problem.)

I think what happened is that the bottom was so overdone it kept a strong shape, while the sides were flimsy in comparison, and when I tried a tighter stitch, it just brought in the sides even more. So, I now have a bowl made of yarn. It’s sort of cute, and I may try felting it someday. In the meantime, it’s holding all those little scraps of yarn I trim off of my projects.

Now for some good news. I actually used the final amount of my Bollicine yarn and made myself a pair of slippers in just two hours–I’m getting faster. I used the blue loom and the same pattern I’ve used for the others I’ve made (Isela’s pattern for ribbed socks–PDF document). Because this yarn is thinner than the others I’ve used, I had to use two strands throughout. This time, though, I knew I had a limited amount of yarn and I didn’t think I could spare enough to make a full cuff or even a short, ribbed cuff, thanks to the dreaded bag/bowl fiasco, so I knitted just five rows and let the tops roll down. This is the same type of “rim” my bowl has, so I knew I could get away with that type of cuff. The rest of the slipper was identical to the others. I turned the heel, knitted 16 rows for the foot, and then did the toe.

Now that I’m on my third use of this pattern, I’ve figured out how to avoid having a small hole in the side of the heel. For some reason, I always end up with a hole near the first peg. This doesn’t happen near peg 12, just the first one, so this is how I correct it. I knit the entire heel just as Isela lays out. I knit the very final row of the heel (from Peg 13 to Peg 1), and then I’m ready to start from Peg 1 to go back in circular rows for the foot, only I start out by wrapping Peg 24 first, and then I wrap 1, 2, 3, etc., all the way around to peg 23. I then wrap 24 again (Peg 24 now has three loops on it), and KO all the pegs, including TWO loops on Peg 24 so there’s only one loop left. There may be a better way to do this, but I haven’t stumbled across it yet. I wonder if the reason why I have this problem is that I always wrap in a clockwise manner. Maybe if I wrapped in a counterclockwise manner, this would go away. Something else to think about.

Aren’t they cute? I wore them for a few hours, and it looks like my foot is still inside.

2 Replies to “A yarn bowl, plus slippers for me”