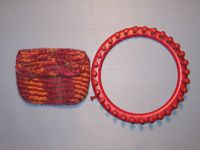 I had another try at felting. Having read up a bit, I decided on a coin purse, mainly because I didn't care what size the end product was. I'm new at this, I tell you. I used about 3/4 of a skein of wool, probably 100 yards, and used the red loom. I knitted about forty rows in the round, then I just knitted back and forth on one half of the pegs for the flap. I cast off with a slightly different method this time, and it worked dandy for this project. I took one loop, hooked it over the peg closest to it, and then knitted over. Then I took the remaining loop on that peg I just knitted off of, and I hooked it over the nearest and knitted over. Over and over. I did the same for the loops remaining on the other half of the pegs. I then stitched the bottom. I had a purse about 6" wide and probably 5" tall. I'm sorry to say I didn't photograph the before picture, but here's the after. I decided to flip this inside out, because I liked the look of the "purl" side better than the "knit" side. I washed it in a hot washer and then dried it for probably 30 minutes.

What I learned: Felting works, and it's super cool. Using the KK means you should knit a denser object than you think. Use two strands or a chunky-type stitch (one over three).

What I wish I would have done: Put on a button before felting!