My new favorite book is Norwegian Pick-Up Bandweaving by Heather Torgenrud (2014). It focuses on everything I like about weaving: the history, the color, the texture, and the process. Plus, there are dozens of patterns. If you have an interest in weaving Nordic-styled pick-up bands, well, here’s your book. Using a rigid heddle with a backstrap setup, this style of weaving produces sturdy, vivid, and cheerful bands which were once used around the house for things like belts, shoe laces, baby swaddling, package ties, and clothing decorations. Heather Torgenrud’s book is that type of reading that gets to the heart of an important style of weaving, a delightful discovery for someone like me, the weaver who likes to know.

I’ve had an interest in this style of band weaving ever since, over four years ago, I discovered a treasure in an antique shop, a Norwegian rigid heddle, or bandgrind: 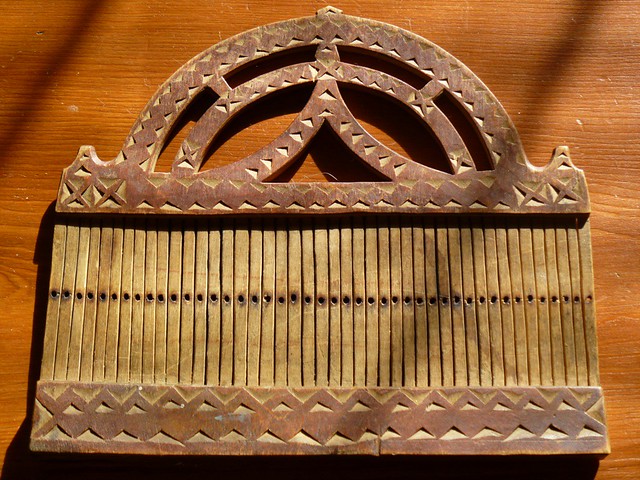 Isn’t it gorgeous? Hand carved, it may have been a traditional courting gift from a young man to a young woman. It was most likely used with the decorative top hanging downward although I’m not positive about that. At the time, I wasn’t certain what it was other than a little loom, and it took some research to come across the explanation. Although you can use a band loom on a regular frame loom, they were normally used with one end of the warp tied to something sturdy like a doorknob and the other end secured around the weaver’s waist, backstrap style.

I love the portable nature of band weaving, and currently I’m looking forward to receiving a “slotted” rigid heddle, which is useful for weaving patterns. Although I love my antique band loom, I don’t dare use it, so in the meantime, I’ve been using my small Ashford Sampleit loom for some practice. Here’s a seven-thread band with embroidery and crochet cottons: 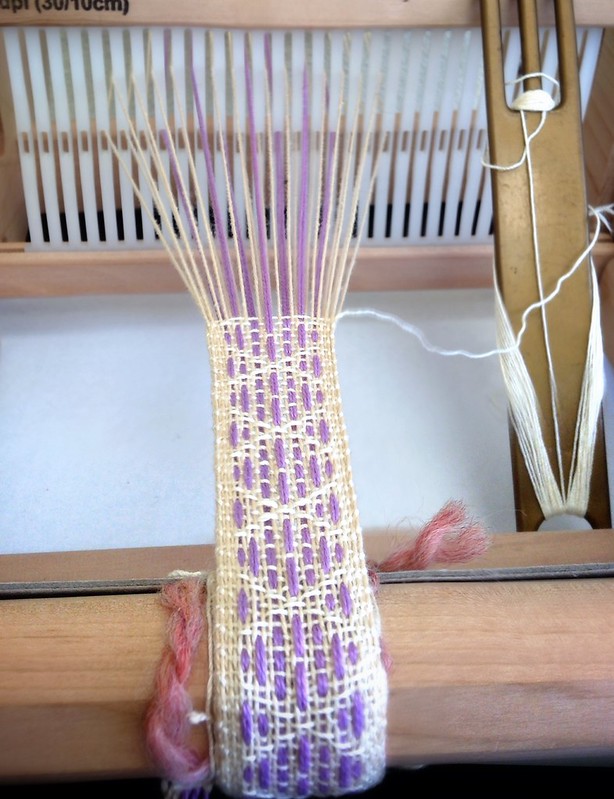 A great project for summer is inkle or band weaving using cotton. Here, I made a belt and a band for my new Tilley TH9. I used my inkle loom for the belt, but I prefer using a rigid heddle when doing pickup to be able to better see which strands to pick or drop. For a frame I used a Spears #4 loom and a little heddle I’ve had for years. Worked like a charm.

The 1970s are cool again–if you’re a fiber nerd, that is. Maryanne Moodie was the first weaver I spotted who was calling upon the age of shag carpeting to create a more-modern-but-still-earthy wall hanging. There are several weavers out there doing very creative wall hangings nowadays. If you’re inspired to give it a try, here’s a nice tutorial to get you going. 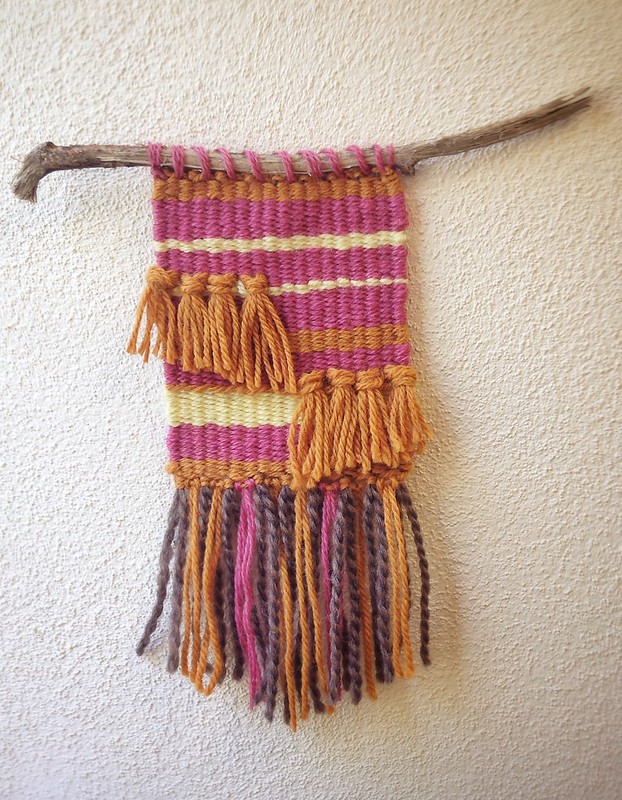 I wove mine on the little Goodwood Pocket Loom, not made any longer, but pretty much any small loom or picture frame will work. This measures 4″x5″ off the loom, not counting the fringes. This was a fun, fast project that I’d like to do on a larger scale… maybe on my new loom. And, no, I’m not talking about the new loom I just posted a few weeks ago but another one, a Hagen tapestry loom that I’ll blog about soon. 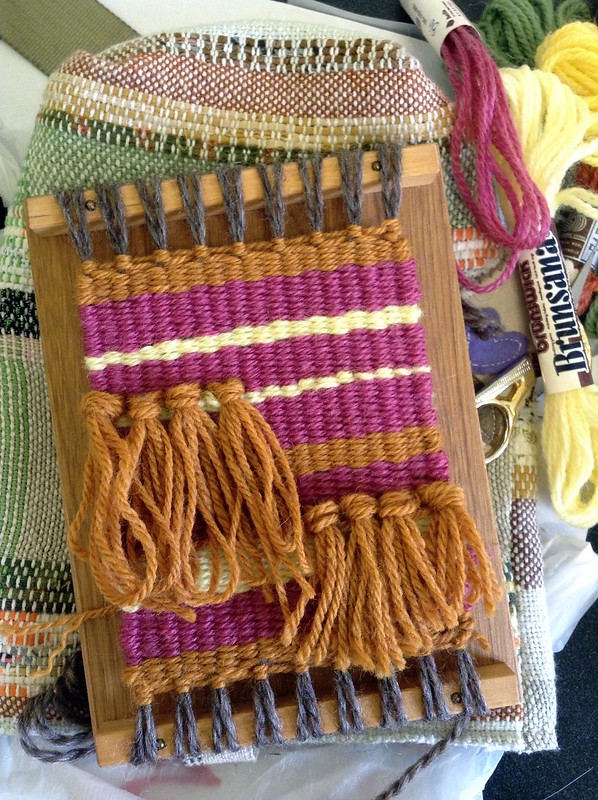 Here’s a new-to-me addition to my loom family, a 25″ Schacht Tapestry Loom. 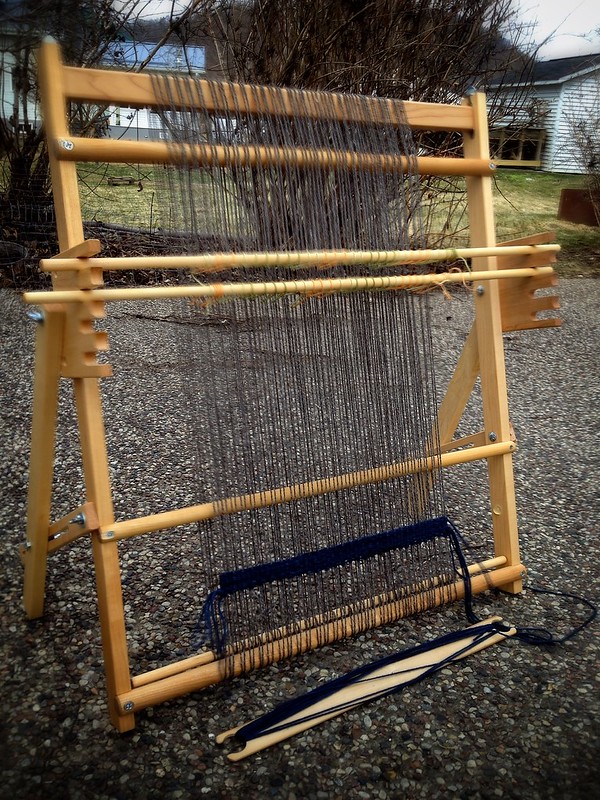 It’s a deceivingly simple loom, basically a frame with a tension bar, but it has the ability to do a continuous warp, which means you can weave something 60″ long, plus it has four harness dowels for patterned weaving. I warped the loom with what I had left of my churro warp. Spacing it at about 5 epi, I have a 15″ width. I wove a footer with some beautiful blue indigo wool, and then I used string heddles to add a twill pattern. It takes four harnesses. My plan is to only do small areas of twill, followed by some wedge weave. 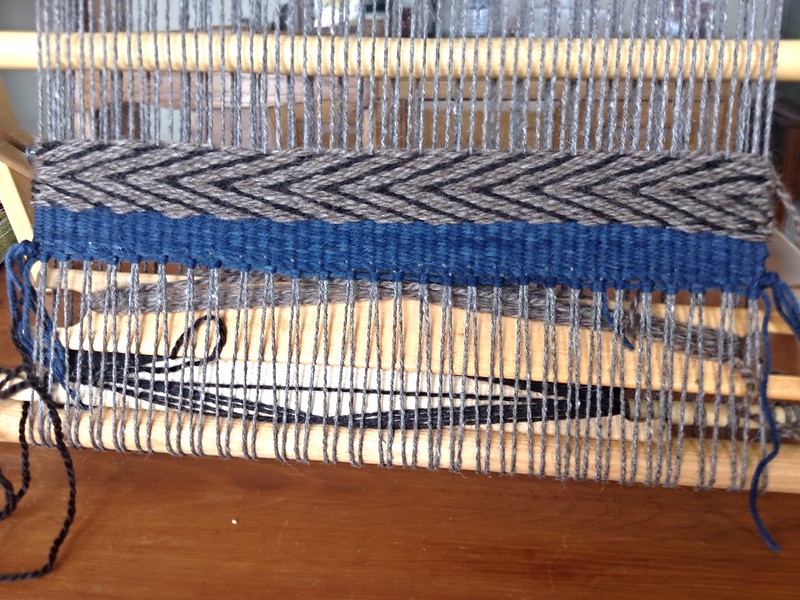