An update from the home office 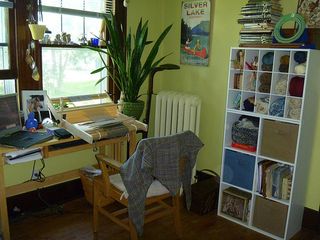 I actually did organize my office… and then it got messy again… and then it was so hot I didn't want to weave… But now it's a lovely 75 degrees and I was inspired to tidy it up. I bought an shelf organizer thing from Target and have found it a good place to store yarn and supplies. It's a little bit cluttered but I don't mind in the least. I like having my chicken pincushion, all my Weave-Its, and yarn handy. Speaking of yarn, that's all of it, with two of the square bins also about half-full. I've never purchased yarn for yarn's sake–I tend to buy it for projects and use it up. The bins are full of small amounts left over. Any full skein was purchased for a project that never materialized. Now that I have a loom, though, I think a little differently, and I can see myself purchasing ahead of time. Recent thrift finds
I found a goldmine of discarded library books on weaving and needlework. There were nearly 30 of them! Happy me! I particularly enjoy the older weaving books like The Joy of Handweaving, Your Rugs, and Weaving Tricks. I found myself with not one, but two copies of Visual Instructional Macrame by Joan Michaels Paque. I did get a little enthusiastic in grabbing up these old books.
Also new-to-me the past few weeks, a homemade rake loom. It's a really lovely loom with close-to-small gauge pegs. The pegs are places in a staggered pattern that I haven't quite figured out. It's missing a few pegs but I think it will do nicely as a dishcloth loom. I also snagged a $1 deal, an EZEE knitter, used for fine panel knitting, with an unfinished project on it.

One Reply to “An update from the home office”