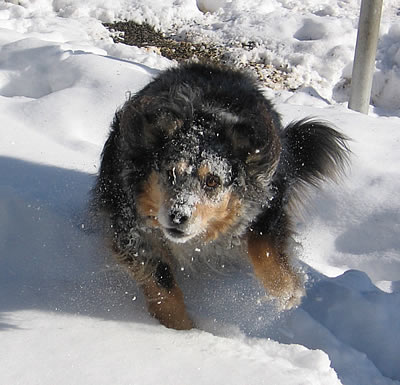 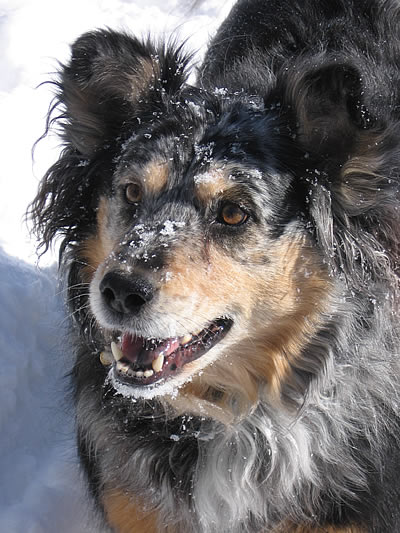 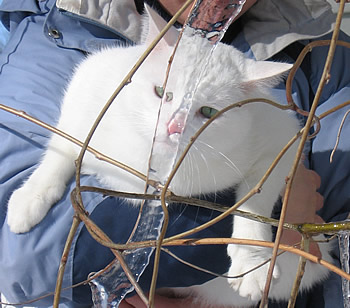 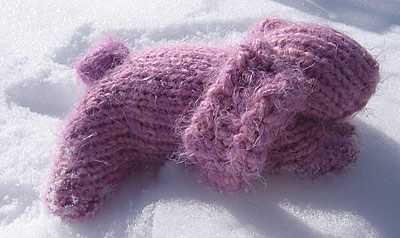 So, what brought yarn kitty and yarn dog out of the house on a winter day? In the past week we’ve had 30″ of snow, and yet there they were, both staring at something.

Could it be? Could it really be that they spotted Big Bubba, the harbinger of spring?

The kitty peered cautiously through an icicle. The dog bounded, but Bubba was too fast and got away! And least I think he got away.

Okay, enough silliness! What I really wanted to say is knitting bunnies is a good way to trigger spring. Even with all the snow, the sun is shining and the ice is melting the day after a winter storm. So, never again doubt the power of a pink, knitted bunny named Bubba.

I made this bunny using the same pattern as before, only this time I made him much bigger. I cast on 24 stitches on the blue loom and knit back and forth to create an 8.5″ square flat panel. I used the flat stitch and two strands of yarn–one Bernat Softee and one Moda Dea Dream. Because this bunny is so much larger than the other two, I had to guess how much bigger to make his ears. I cast on pegs 1-6 and purled the two middle pegs. I added two additional rows, and that’s all it took to make the ears. I did sew them on backwards so they had a floppier look.
Bubba is a little bit big, and although he’s cute, he’s no where near as cuddly as the little bunnies. Plus, his back legs look a little distorted.

But if Bubba can bring about spring, who can complain?

And what does yarn dog think about it all? Can she complain? “Nope,” she told me. “Bubba was delicious!”