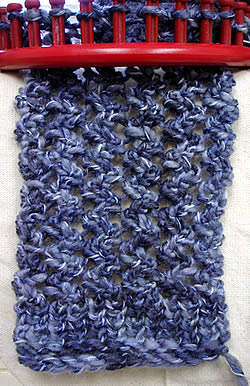 I started a scarf using the ziggy zag stitch. (You can find written directions for this stitch in the Yahoo Decor Accents Group. Go to Files, and then Stitches. Isela Phelps has written them up.)

To make this scarf, I’m using one strand of a beautiful blue wool blend. (Yarn Bee Mosiac Twist, Color: Moody Blue) and the red loom. This stitch needs an even number of pegs, so I cast on 12 pegs using the crochet cast on. Then I knitted one row and purled one row. This gives the scarf a non-curling edge. I then knitted back and forth for six rows using a stitch that’s described in Isela’s pattern. It’s a lot like the mock crochet stitch but instead of knitting three pegs at a time, you only use two. It’s an easy stitch to learn so I won’t describe it here.

Then, I started doing the ziggy zag stitch. This is a fun, pretty stitch but it can be a little complicated, so I’m posting some pictures of how I interpreted it. Please let me know if I’ve made a mistake. 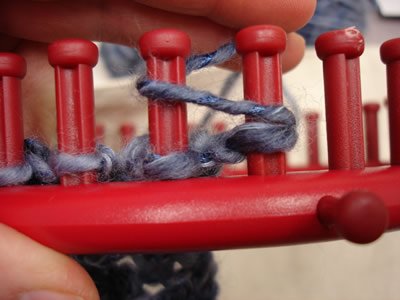 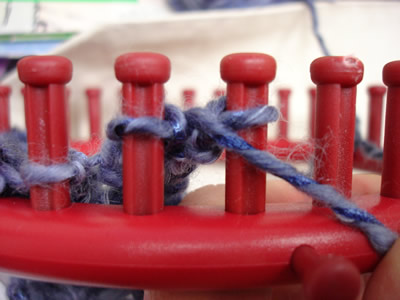 STEP TWO: Bring the yarn BEHIND Peg Two, and then pull it in front of Peg One. Purl Stitch Peg One (ziggyzag2). Now, the yarn should be to the right of Peg One. 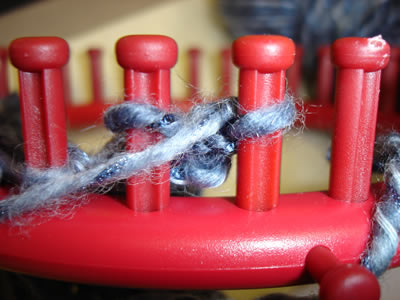 STEP THREE: Bring the yarn BEHIND Peg One and in front of Peg Two so your yarn is now between Pegs One and Two. Purl Stitch Peg Two (ziggyzag3).

Now, you’re ready to move onto Pegs 3 and 4 and repeat Steps 1-3. Continue this pattern until you reach the end of your row. Then head back the other direction. (Check Isela’s pattern for clarification.)

This is a really pretty stitch. It gives a zig-zagged edging, too, so you may want to include a border on either side of your project.