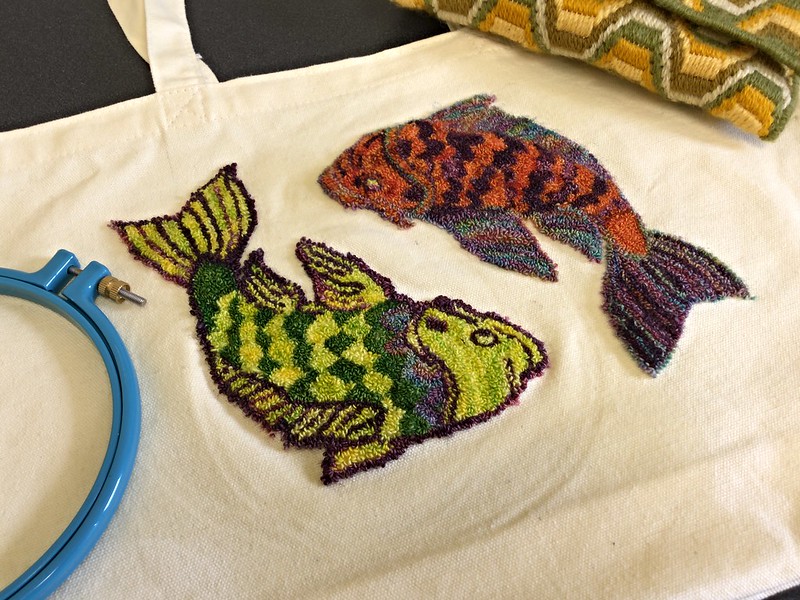 September 4, 2010 horsenettle No Comments
I spent a few hours sewing the seams of my Doni's Deli bag. It's a little tricky, but I pinned it together and suddenly it all made sense. I decided to sew the handle edges together, but I'm uncertain about how it looks. I may tear out that seam and leave it. I had left enough fabric to create an inside pocket, but I also like letting it drape over the top. If I added a big button, it'd look pretty cute!
What's left? Maybe re-doing the handle, maybe making a pocket/adding a button, maybe adding a liner. This is one big project! 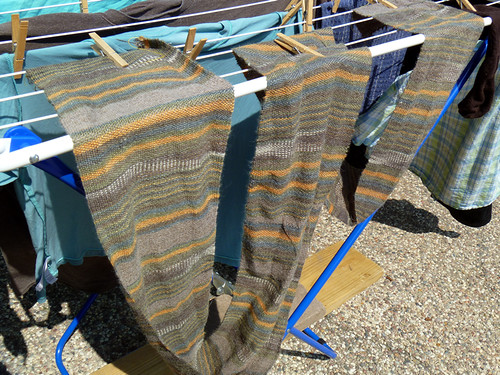 Here's the full fabric for my Doni's Deli bag, drying outside in the hot sun. I have a front-loading washing machine, and I was hesitant to wash this alpaca, wool, bamboo mixture, so I did it on the hand wash cycle. Some of the loopy selvedges did even out (as promised by the experts on Ravelry), but overall, the fabric was the same. So, I got brave and tossed into a regular load on warm. It came out exactly the same.

So, although I didn't notice the words "Super Wash" on any of my yarn, it obviously doesn't want to felt. The good news is that I have a long enough piece to try to add a pocket to my bag.

It's been over two months since I warped my Emilia and started weaving the fabric for a bag like the one at Doni’s Deli. Why two months? Well, I made some beginner mistakes, which I don't have to list, but the main one was I chose sock yarn for both the warp and weft. With a 12 dent heddle I probably would have been okay, but I only have a 10 dent heddle, and it took a gazillion rows and hours (at least!) to finish the fabric, which measures 100".

Now for washing, hemming, sewing… Later. For now, I'm content to watch it come off the loom a couple dozen times. (Note, this short video is uploaded to Flickr):

When I neared the end, I ran out of my main sock yarn and also my patience, so I dedicated the final few inches to experimenting with the clasped weft technique. If you're interested, there's a short tutorial available here, and lots of lovely examples posted on blogs. 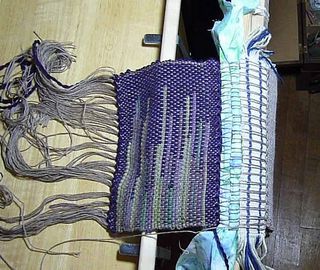