What stitch is this? 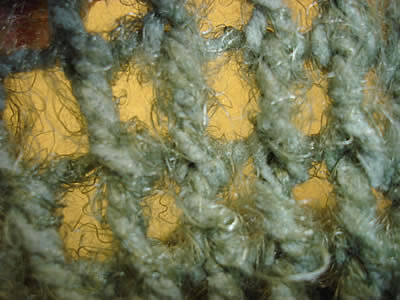 I’ve been working on a shrug, and I decided to use a looser, lacier stitch than the ones I’m familiar with, so I’ve been using this one. It’s just one strand of yarn (Yarn Bee, Cameo). I don’t know the name of the stitch yet, but I’m trying to find it. I cast on and then, with one stitch on each peg, I double-wrap each peg–I don’t go around the loom twice, I simply wrap each peg twice–then I move onto the next, and so on. I then knit the bottom two wrappings over the top one, leaving just one wrapping on each peg. This creates a boxy looking stitch. I’m not certain if I like it, but I’m going to keep on with it.

As far as shrugs, this will basically be a rectangle (knitted as a flat panel on the yellow loom) about 36″ long. I’m also knitting two sleeves/cuffs on the blue loom. If they’re too small, I may switch to the red loom to get a looser look. I’ve never made a shrug before, so it’s yet another experiment. Honestly, I don’t even know if I like shrugs, but it’s fun to make something new.

There are a ton of free patterns for shrugs here, but they’re all knitting patterns, so you’ll have to find a way to convert them to a loom. I tend to like the ones with a front on them, like Berroco’s Evonne, but I like the look of this one, and the one listed on this vintage pattern site (scroll down to see it). The one at the Lion Brand free pattern site is neat, too. I’ll put these in my to-make-someday-when-I-have-a-finer-gauge-loom file or my to-make-someday-when-I-understand-how-to-convert-patterns file.

6 Replies to “What stitch is this?”