What Santa Brought Me…

…Yarn! And a new KK purple loom! I'm very quickly becoming addicted to loom knitting, and I've discovered several Yahoo groups plus some great knitting blogs out there. I'll add links soon, but Isela's is one of the greatest sites. She's made a dozen short movies, and I've learned some great stitches from watching them–flat stitch, purl, etc. We'll see how I can incorporate them.

I bought some great Turkish yarn. It's got a Mohair look, and it's a brilliant green, but I can't decide what to use it for. I also bought some more Lion yarn, plus two skeins of Lion 100% wool with ideas of felting projects.

My latest project was my first real mistake. Using the new purple loom, I used two strands of dark blue wool and knitted a panel (the purple loom knits a double-knit panel that looks good from both sides. If you do a flat panel on the regular round looms, you have a front and a back.) I made the panel long enough for a French Press cozy, which is what my husband requested, but I was stumped as to how this would shrink down. Well, here's the end product! Doesn't it look like a doll's skirt? I tried felting this panel by hand in the sink, and it ended up with holes, gaps really. It's thin and pretty ugly. 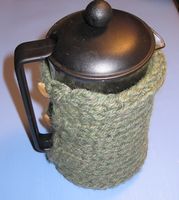 So… determined to get this project finished, I decided felting was best left for machine shrinking (it would have been too small anyway), and I knitted another panel on the purple KK loom using Wool-Ease. It came out the right size: 10" x 6". I added a few buttons, and we'll call it finished. This was the first project that frustrated me a little because I wasn't using a pattern, just guessing. If I had to do this again, I'd probably use the red loom and knit in the round for a inch or so (for the bottom), and then find a way to knit back and forth, leaving an opening for the handle of the French press.

So, this is my finished French Press Cozy.

I made a ball 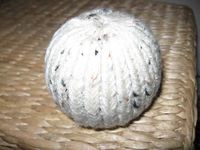 And here it is! It was a silly project but one I had fun doing. Using the blue loom, I cast on using one thread, but I wrapped the loom four times. I then brought the bottom thread over the top three, and continued with this for about thirty rows, wrapping one new one each time. I gathered the bottom together and pulled it shut like you would with the top of a hat. I didn't have any stuffing so I used scraps of yarn, and then I gathered the top and pulled it shut.

This is a fun indoor toy, and it bounces against the wall without leaving a mark. 🙂 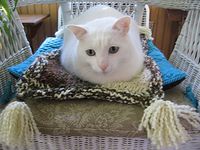