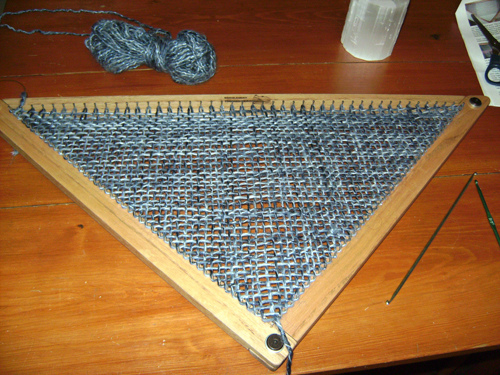 …and look what he left for me!

It's a two foot triangle loom from Hideaway Homestead. A few weeks back, I knew I'd end up with a triangle loom, but just like I always do, I decided to try to make one myself, even after the mess I made trying to create a 4" square loom. This time, though, I decided I'd try it with cardboard. It doesn't cost a thing, and believe it or not, talented people can actually make looms out of cardboard and then create lovely shawls with them.

I'm a not one of those talented people. My loom looked okay, but I didn't have any pins so I decided to cut notches on the top, or the hypotenouse. Believe it or not, this worked, but it made the weaving so slow that after a few hours, I gave up, and followed the sage advice my dear husband had given me after he stopped laughing when I showed him my failed 4" square loom… "Leave it to the professionals."

So, I emailed Hideaway Homestead, an off-the-grid loom maker from Arizona, on Friday evening, ordering their 24" loom from Etsy. And guess what? I was opening the box on Tuesday morning! Hooray!

My loom is lovely. The pins are straight and the oak is smooth. The two foot size is just large enough to weave a triangle in about 30 minutes, plus you don't need an easel. And, just like the 4" Hazel Rose Multiloom, I find I can do one short project and then turn around and begin another right after. There's no setting-aside-to-finish-later-which-turns-into-a-year-later syndrome, if you follow me.

Last night, I finished two test triangles, one in an older Yarn Bee blue I had lying around, the other in Lion Brand Homespun. If these had fringes, they'd make cute shawls for dolls.

Because the loom was so economically priced, I was also able to saunter into my favorite yarn store and purchased $20 of stunning yarn, Berroco Peruvia Colors in Herb Garden. My plan is to weave about nine tris and stitch them together for a shawl. I'll then felt it a little, but I'm going to do a test one first to see how much it'll felt. 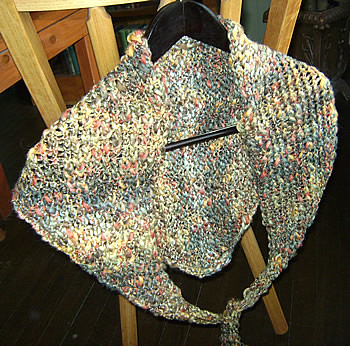 Last night I finished knitting this little shawl on the yellow Knifty Knitter.I used the pattern I listed below in a previous posting, by Rostitchery. Although I had some trouble decreasing, in the end, it turned out. Rowena had instructions to put the last loop on the near peg and KO. Then, wrap that “new” last peg, KO, and continue on down the row. I found this made the edge tight, not loopy like on my increase side. To try to make it match a little more, I would do just as she said by pulling the last loop to the second-to-last peg and KO. Then I would double wrap that final peg, knit 2-over-1, and continue down the row. Because the yarn is bulky and also varies in thickness, it passes just fine.

I used Moda Dea Cache in Tootsie, about 2.5 skeins. This is not a favorite yarn of mine. In fact, I bought it for $1/skein at Goodwill months ago. It makes a cute shawl, though!

My only thought on this shawl is whether or not is should be blocked. It fits snugly around the shoulders, and I like it that way, so I don’t think I will, but we’ll see.

This is a fast project to knit. I estimate it took me about five hours total.

However, I’ve encountered a problem. The first edge of the “V” has a loopy edge, made by how I interpreted her directions to skip one peg, knit the last peg, and then do a full row back. I have a funny feeling I shouldn’t have done it quite that way; however, I’m stuck with it. It looks nice.

But now I’m starting back up the opposite side of the “V” and I’m decreasing a peg each time. Instead of that nice loose edge, I have a normal edge. Hmmmm… I’m trying to figure out how to add an extra loop on this side of the shawl.

I’ve been using some of my stash of $1 Moda Dea Cache (Twinkle). I think I’ll end up using approximately 125 yards, or 2.5 skeins. Photos to come.